Last year Laksa Media published Strangers Among Us: Tales of the Underdogs and Outcasts, an anthology of stories focusing on mental health. It included writers like Kelley Armstrong, A.M. Dellamonica, Gemma Files, A.C. Wise, Hayden Trenholm, and more. The book included a number of good stories, but perhaps my favourite thing about the project was that upon publication Laksa Media donated $1000 to the Canadian Mental Health Association, and then part of the proceeds later went to that same charity.

Last Fall I met the editors, Susan Forest and Lucas K. Law, at CanCon and we got around to talking about the book. After some discussion on disability and caretaking, they asked if I would be interested in writing the introduction to their next book The Sum of Us, an anthology of stories about caregiving and caretaking. I’ve been in a caretaker position, and I’ve also had people support me throughout my life with my disability, so these are subjects that matter to me. I was flattered as well as touched, and I accepted.

Now Laksa Media has released the cover and the table of contents. (Look, that’s my name on the cover.) As with Strangers Among Us, the publisher will be donating $1000 upon publication to support one of the programs provided by the Canadian Mental Health Association, and then part of the proceeds will also be going to one of those programs. It is quite a lovely project, and I hope you’ll consider supporting it. (I mean, come one, you get good fiction AND you get to support a good cause!) 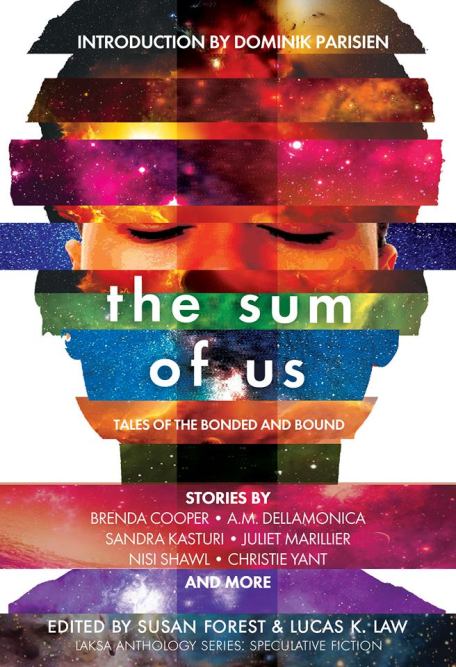 The Sum of Us is due out on September 8th, 2017. You can pre-order the book from Laksa Media.

Laksa Media also released the ToC for another anthology, Where the Stars Rise: Asian Science Fiction and Fantasy, this one edited by Lukas K. Law and Derwin Mak, with a nice blurb by Aliette de Bodard. The anthology is in support of Kids Help Phone.