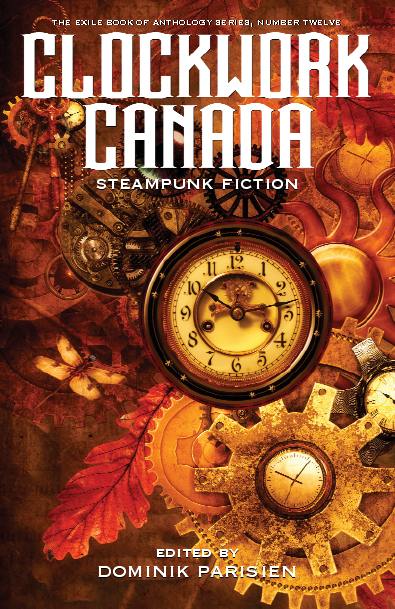 Welcome you to an alternate Canada, where steam technology and the wonders and horrors of the mechanical age have reshaped the past into something both wholly familiar yet compellingly different. These fifteen supercharged all-new tales reimagine Canadian historical events, explore alternate Canadas, and gather inspiration from the northern landscape to make us wonder: what if history had gone a different way?

Experience steam-powered buffalo women roaming the plains; join extraordinary men and women striking out on their own or striving to build communities; marvel as giant rampaging spirits are thwarted by a miniscule timepiece; cringe when a great clock chimes and the Seven O’Clock Man appears to terrorize a village in Quebec; witness a Maritime scientist develop a deadly weapon that could change the course of the American Civil War.

Tor.com: “[Clockwork Canada] is a true delight that hits on my favorite things in fiction—curious worldbuilding, magic, and tough women taking charge. It’s a carefully curated adventure in short fiction that stays true to a particular vision while seeking and achieving nuance.”

Lightspeed Magazine: “I hugely appreciated seeing, across all these stories, a Canada shorn of any of the jingoistic patter that masquerades as heart-warming pluralism these days. These stories probe and poke at the country’s beginnings as at the edges of a wound: the workers who fed their bodies like coal into the railroad’s furnace; the immigrants who were turned away at ports for being too brown, too foreign; the enslavement of African peoples; the indigenous people displaced and decimated. “So you think you know about Canada,” any of these stories might begin. “Let me tell you about Canada.” And… “An excellent showcase for new and established Canadian voices as well as for Parisien’s editorial skill, Clockwork Canada’s a fascinating, faceted read that I thoroughly enjoyed.”

Quill & Quire (print review): “While the immersion in steampunk tropes and milieux will no doubt be enthusiastically embraced by devotees of the genre, Clockwork Canada isn’t insular, and will welcome most any reader possessed of an adventurous mind.”

AE – The Canadian Science Fiction Review: “Not all of these stories will satisfy steampunk enthusiasts, but that’s probably the point. With so much material published in recent years, steampunk can become shorthand for clichéd Victorian characters plugged into action stories featuring inventive devices and lots of gears. For the most part, Clockwork Canada retains the gears and action while disregarding the clichés and greatly amplifying the spirit.”

Broken Pencil: “Steampunk makes a refreshing return to the literary scene in Clockwork Canada, an intriguing and imaginative read.”

Speculating Canada: “Clockwork Canada reminds readers that the idea of “nation” is itself a story that we tell ourselves to hold us together and that that story, that history, can be divisive, damaging, and harmful. The multiplicity of stories in Clockwork Canada invite readers to think of our nation as a storied space, filled with a multiplicity of voices. These steampunk stories punk canonical narratives and invite readers to question the history they encounter. This isn’t nostalgia fiction, these stories are all about gearing up for a critical take on history.”

Steampunk Canada: “Each story is very unique and the authors have done a lovely job of bringing to life an alternate Canadian history.”

The Charlatan: “There’s a story for every reader, from fast-paced adventure to character driven, where fantasy meets mechanical, industry, science, the occult, war and colonization.”

“Steampunk with a Canadian accent – in Clockwork Canada Dominik Parisien has given us a wonderful new way to look at not just Steampunk but also some of the best new Canadian fiction being written.  Full of adventure, surprise, unusual inventions and, of course, steam, this anthology will make you remember why you fell in love with Steampunk in the first place.”

“This is Canadian fiction like you’ve never seen it before: a buzzing, crackling, supercharged assemblage of thrills and derring-do, secret histories, incredible machines and fantastical creatures. Prepare yourself for a wild ride through a landscape that’s somehow recognizable and utterly, gloriously strange.”

— Helen Marshall, World Fantasy Award-winning author of Gifts For The One Who Comes After